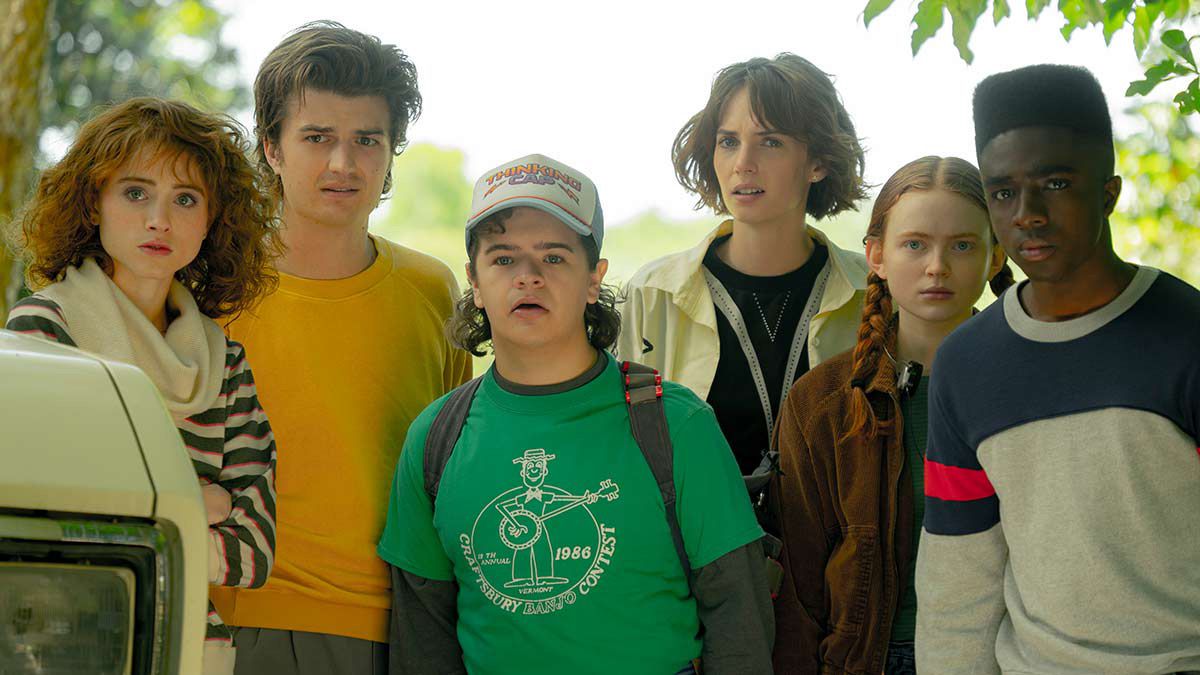 Steve woke up the next morning on the Wheeler's basement floor, this time with his arm wrapped securely around Kim's waist. He'd missed this. The last few nights all he had wanted to do was hold her close and make sure that nothing was going to happen to her.

She shifted against him, muttering incoherently in her sleep. She continued moving around, her face scrunched up in confusion. Steve had slept next to Kim enough times to recognize when she was having a nightmare. He gently shook her awake.

Her eyes flew open, darting around before realizing she was only at the Wheeler's house.

"Are you okay?" Steve whispered, not wanting to wake the rest of the group.

"Yeah, yeah," she said while trying to catch her breath. "Just a nightmare, I'm fine."

Steve studied her suspiciously before pulling her close to him again. "I've got you, Kimmy. Go back to sleep. It's gonna be okay."

She nodded against his chest, closing her eyes. She stayed like that, trying to steady her breathing and hoping Steve would think she had fallen back asleep. She felt him drift back off but she stayed on high alert. She couldn't let herself fall back asleep. If she did, horrible visions of Barb and her father waited for her when she closed her eyes.

"Not to be a wimp, but can I sit in the car?" Robin asked as they drove to Reefer Rick's house to bring Eddie his food supplies. "Cause this is gonna totally and royally suck."

"It'll be fine," Nancy reassured her from the driver's seat.

"At least he can drink himself into feeling better," Steve said, holding up the six-pack they had bought per Eddie's request.

"That's what my mom does," Max mumbled.

"Why don't we just give it a trial run?" Robin suggested. "'Hey, Eddie. Uh, good news first this time. We got you some Dustin approved junk food and that six-pack you requested. Oh yeah, and we found Vecna. Only the bad news is that he's in that other, darker, much scarier dimension that we told you about, and the gate's closed, so we have no way of getting to him. Like, he's entirely shut off to us, so basically you're screwed. And, no, I know you were already screwed, but now you're, like, doubly, triply screwed.'"

"Maybe we don't put it like that," Lucas said.

"See, Robin?" Steve said, eating the Pringles that were meant for Eddie. "Positive spin can make all the difference."

"Oh shit," Nancy muttered, slowing down as she saw the cop cars outside of Eddie's hideout.

They quickly climbed out of the car, trying to figure out what was going on and if the police had caught Eddie. They took cover behind a news van, watching Sheriff Powell give an interview.

"...reporting a homicide out here on the lake. Officer Callahan here and myself arrived first on the scene. We made our way to the shore of Lover's Lake about ten yards from that house you see behind me. It was there that we found the victim, an 18 year old senior from Hawkins High, Patrick McKinney."

Lucas sucked in a breath. He hadn't been particularly close with any of the basketball guys, but Patrick had always been the nicest to him, the one that made him feel most a part of the team even before he helped win the Championship game.

Powell went on. "We have also identified a person of interest. Eddie Munson. We encourage anyone with information to please come forward."

"Oh man," Steve muttered, all of them still staring in shock. "This is not good. This is really not good."

Dustin's walky crackled before Eddie started to talk. "Dustin, can you hear me? Kimmy?"

"Eddie, holy shit," Dustin said, trying to keep his voice down so the crowd surrounding Sheriff Powell couldn't hear him. "Are you okay?"

"Where are you?" Kim asked into the walky.

Kim looked over at Steve, "Uh, yeah. It's near Cornwallis and–"

"Garrett," Steve finished. "Yeah, I know where that is."

"Dude, I'm telling you, you're taking us the wrong way," Steve said. He, Kim, and Dustin were at the front of the group, everyone else trailing behind, having their own little conversations.

"You do realize Skull-Rock is, like, a super popular make-out spot?"

"Yeah. So?" Dustin rolled his eyes.

"Yeah, well, it wasn't popular until I made it popular," Steve explained. "Alright? I practically invented it."

"Wow, what a trend setter," Kimmy joked, trying not to laugh.

Steve rolled his eyes, but was secretly really glad they had their old banter back. "All I'm saying is we're heading in the wrong direction."

"Steve, where are you going? Steve!" Dustin called.

They continued through the woods, Dustin and Steve bickering about which way to go and Kim interjecting every once in a while.

"Oh boom!" Steve yelled when they finally made it to Skull Rock. "Bada bing, bada boom. There she is, Henderson, Skull Rock. In your face, man. In your stupid, cocky little face."

"Yeah, yeah. Even with it staring you in the face you can't admit it. You just can't admit you're wrong, you butthead" Steve taunted.

"Steve, I think we should take some time to unpack the fact that you're an adult and you're calling a child a butthead," Kim smirked.

"I concur," Eddie said, walking out of the shadows of Skull Rock. "You, Dustin Henderson, are a total butthead."

Kim shook her head. "The fact that you can both legally vote is terrifying."

Eddie smiled at her. Her jokes always made him feel better, even when the whole town was accusing him of murder.

"We thought you were a goner," Dustin said, pulling Eddie into a hug.

"Glad to see you're not dead," Kim grinned at him.

"Yeah, thanks, Klepto," he rolled his eyes, trying not to smile back at her.

Steve and Eddie awkwardly nodded at each other. As the rest of the group finally caught up, they could already sense the tension between the two.

Kim cleared her throat. "So, uh, what happened?"

Eddie explained about Jason and his basketball goons finding the boat house, how they chased him into the middle of Lover's Lake, and how he had watched Partick die the same way Chrissy had. "When I got to the shore, I tried calling you guys, but, uh, my walkie was busted, man. Drenched. So, uh, I did the thing that I do now, apparently. I ran."

"Do you know what time this was?" Nancy asked, the wheels in her head turning. "The attack?"

"Yeah, no, I know exactly what time it was. My walkie wasn't the only thing that got soaked," he took off his watch and threw it to Nance.

"Which means what, exactly?"

"That that surge of energy was Vecna attacking Patrick," Nancy explained.

"And where he attacks from," Lucas added.

"So now we just need to sneak into his lair in the Upside Down and drive a stake through his heart," Max said like it was no big deal.

"If he even has a heart," Robin scoffed.

Max rolled her eyes, reminding everyone of Kim's attitude. "It was a metaphor."

"A bullet should work on him, right?" Eddie asked.

"I say we chop his head off," Lucas suggested.

"Yeah, I'd say all of the above, but we can't do any of that until we find a way into the Upside Down," Max sighed.

"We need El to get her powers back," Kim groaned.

Steve nodded in agreement. "Everything was, like, way easier." He turned to Eddie to explain. "We had this girl with super–"

"Superpowers," Eddie finished. "Yeah, you mentioned her. Hey, uh, Henderson's not, uh, cursed, is he?"

"Cursed? No, no. He's fine," Steve reassured him. "Mental? Absolutely."

"Yes," Dustin agreed, being totally over dramatic for effect. "And no."

"Oh my god," Kim muttered, rubbing her temples to try and alleviate an oncoming headache.

"This compass worked correctly when we left the Wheelers'. It was correct when we got in the car on Curly. But it started to slip the further east we went. Now it's way off. When I was leading us here, I wasn't wrong. The compass was."

"Except it isn't faulty. Lucas, do you remember what can affect a compass?"

Lucas thought back to seven grade when Will had gone missing. "An electromagnetic field," he realized.

"In the presence of a strong electromagnetic field, the needle will deflect towards that power," Dustin explained. "So either there's some super big magnet around here, or..."

"But we're nowhere near the lab," Nancy pointed out.

"But what if, somehow, there's another gate? A gate that we don't know about. It'd have to be smaller. Way less powerful."

"How? Why?" Kim asked. She definitely wasn't stupid, but she was still pissed her brother got the smart gene.

"No idea," Dustin shook his head. "All I know is that something is causing this disturbance, and the last time we've seen anything like it, it was a gate. And I hope it is because then we'd have a way to Vecna and a shot at freeing Max from this curse." Dustin turned around and started walking back the way he had originally wanted to go.

"Where are you going?" Steve called after him. "Hey, hey, hey, hey, hey! Eddie's still a wanted man. We can't just go for a hike in the woods."

Dustin held up his compass proudly. "This little steel capsule might be the key to saving both Max and Eddie. What say you, Eddie the Banished?"

The group turned to look at the boy with long dark curly hair. "I say you're asking me to follow you into Mordor, which, if I'm totally straight with you, I think is a really bad idea. But, uh, the Shire... the Shire is burning. So Mordor it is."

Dustin jumped around, unable to contain his excitement.

"What is Mordor?" Steve asked, totally confused by everything Eddie had just said.